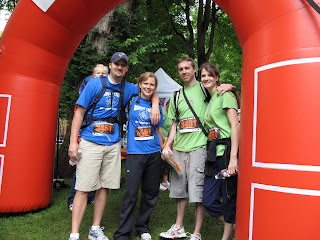 We had such a great time doing this race last year with Jenny and Eric, that we decided to sign up for the Portland 2009 race. Last year Maveric was too little to do the race with us, but this year he was able to come along for the ride (and he actually did really well - and may have even enjoyed it). We were a little worried about the weather, since it rained all night and morning before the race began, but it turned out great for the 3 hours we were searching for clues around the city. 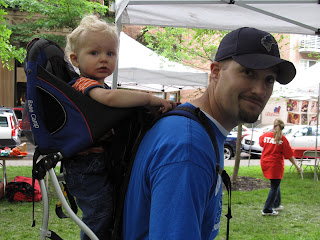 Maveric and Eric ready to start looking for clues.

At the beginning of the race, they give you a clue sheet that you have to decipher, and then find all the places that the clues lead you to. Most of the clues you have to take pictures at, but the pictures have to be specific and show all the details that they are requesting or you get a time penalty at the end of the race. These are some of the places that are clue sheet led us to and had us do. 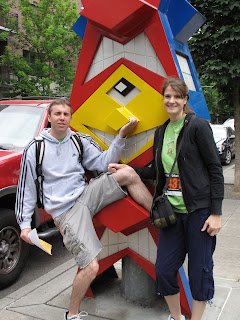 We had to find this random statue by only seeing a picture of it. (Thank goodness for finding a visitors center to help us with the exact location) 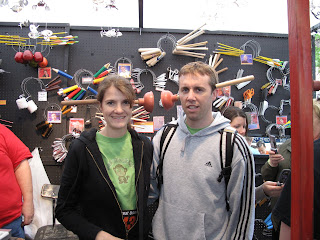 We had to find a booth in the huge Portland Saturday Market and take a picture wearing these beautiful plunger hats! 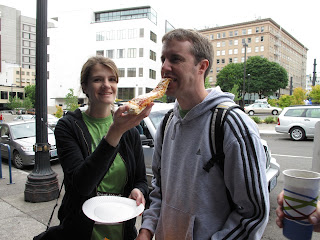 We also had to find a local pizza joint by only knowing the places slogan. Once there we had to take a picture of one teammate feeding pizza to the other (at least Joel got a free piece of pizza). 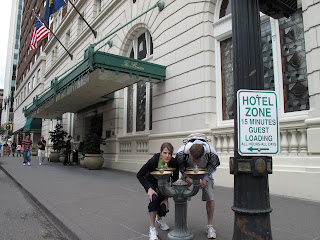 These antique water fountains are all over town, but we had to find this specific one in front of this old hotel built in 1913. This was probably one of our hardest clues, because you had to figure out a riddle to find where you were going.

You are not allowed to use any private/personal transportation (own vehicle, taxi, etc), you can only use their bus and trolley system. We road the metro from time-to-time, praying that we were going in the right direction.

So...we did not finish as well as we did last year, however, the rose garden parade was taking place the same time as the race start, and we could not get to the location of the race due to all the roads being blocked off. We had to park so far away - cut through the parade - and by the time we actually started the race it had been going on for 40 minutes. When we ended, we did not get any time penalties either, and many other teams did because the clues were much harder this year, so hopefully our time will improve. They will email us our actual placement in a few days. We had such a great time! Here is a group photo of us at the finish. 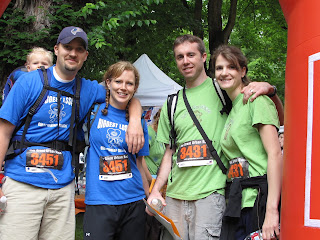 Can't wait for next year!!

How fun!! I was wondering if you guys were going to do this again. Looks like you guys had a blast!!

That looks so fun!!!! I think its great that you do it, and I wish they had one in Spokane!