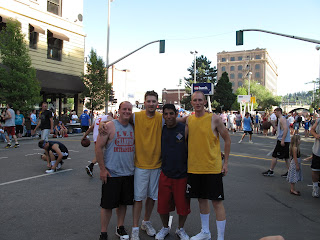 You have got to love how every year Spokane shuts down almost their entire downtown area, and puts up over 6000+ basketball nets/courts for the world’s largest 3-on-3 basketball tournament. I absolutely LOVE basketball (love to play it, and love to watch it), so I totally enjoy Hoopfest every year. The only problem with Hoopfest is that everyone thinks that they are the best basketball player, and should have gone to a NCAA basketball tournament or to the NBA, so let’s just say…that there is some nice rat ball. But put all that aside and you can find some fun games to watch and great people watching. My brother Eric played this year with some friends, so we went down and watch several of his games. The picture above is his team - PJ, Eric, Phil and Russ. They had a good time and really play well together.
Here are some additional pictures from the weekend. 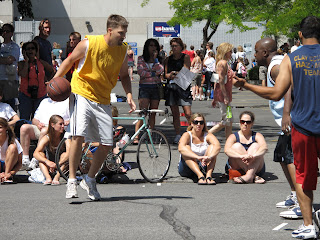 Eric getting ready to drive the ball 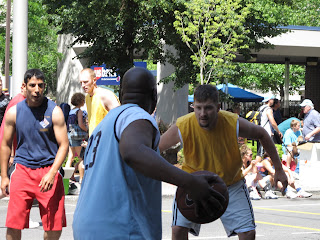 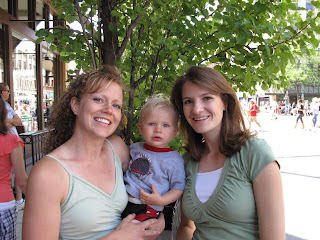 (Jenny, Maveric, and I on the sidelines) 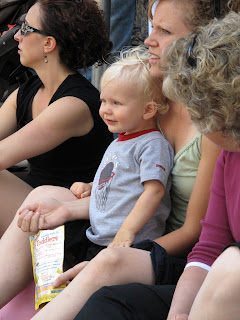 Maveric and Mom watching Eric play.
It is always fun spending time with Jenny, Eric and Maverick. We wish they lived closer so that we could see them more often.

Oh man, we were out of town this last weekend, so I'm sad we missed Hoopfest. Looks like you had alot of fun!!

Hey Jen,
I can help as much as I know to on your camera but I think if you just play around with it you will get to know how to use it really well... I sue Photoshop CS3 for my editing and the burn around the edges is actually a free action that you can get off of Pioneer woman. If you click on Pioneer Woman on my side bar it will bring you to her site and then you can find it in there somewhere...I can look too and tell you how to find it. But she has a bunch of free actions but I think you have to have Photoshop Cs3 or photshop 7.. it is really cool. Ben downloaded my photshop for me so if you don't have it he may download it for you too. Your pics from hoopfest are very good.

It is CRAZY downtown! Look at you two! So full of fun! I love it! Hope all is going well with you guys!