Camping on the River

This last weekend we took a family camping trip to Idaho.  We headed for a specific campground between Newport and Sandpoint but when we arrived they were full.  We decided to drive around and look for any other possible campgrounds and found a cute little place right on the Priest River in Idaho.  There was a little play area and swimming spot, so Ava was in heaven.  It was a great little family get away. 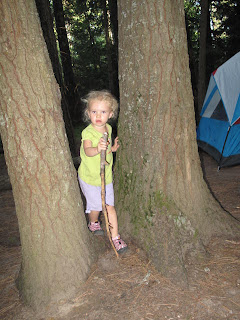 We went with our neighbors to Greenbluff this evening to let our kids run in the Cherry Pickers Tot Trot.  The kids had a blast.  Ava did great in her age division, and then decided to run with the 3-4 year-old's during their race, and the 5 year-old's in the last leg.  She did not want the kid races to end.  Greenbluff is great any time of year!! 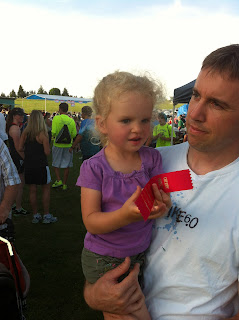 Today for the 4th of July we were supposed to have a BBQ with some friends, but Ava had been under the weather the last few days.  It started out last weekend with her running a fever for 3 days, and then on Monday, July 2nd she developed a rash.  She has not acted too terribly sick through this whole illness, just a little bit cranky at times and tired.  I called her doctor on the 3rd, and he stated that he wanted to look at it, since Ava has had a really bad rash several months ago (this rash does not even compare to that one).  He was not too concerned with it, just thought that it was viral and would be gone in a day or two, but took a blood sample to see if it was a disease that could be harmful to infants or pregnant women.  We will find out the results tomorrow.  He told us not to hang out with babies or pregnant women until we had the results, which made us have to cancel our BBQ plans.
﻿﻿We were planning on taking Ava to a "Little Slugger" race here in town for kids ages 1 - 3.  The race consisted of the kids running the bases at Avista Stadium and then having treats with Otto (Indians Mascot).  When Ava woke up this morning her rash was pretty much gone, and since the race was outside we decided to let her still do something fun on the 4th.  I am glad that we did, because she had a blast.  She came in 3rd place, and looked so cute running around the bases.  We are excited to let her do it again next year too.
﻿