Who Needs One Anyway... 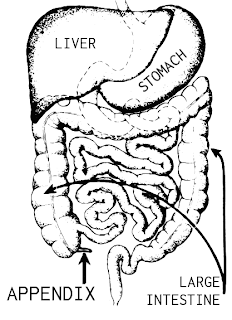 Joel had to have his appendix out today...not by choice. Last night he was in so much pain he could not sit still or get comfortable anywhere. Joel never complains when he is in pain, but this must have been some intense pain, because he said that he was not feeling well and hurting really bad for several hours. I told him that he had all the symptoms of a possible appendicitis, but he refused to go to the ER. We talk and I said if he started throwing up or the pain got worse within an hour we were going to the hospital. Sure enough both happened and he was out the door. At 4:30 AM this morning we got the news that he would be admitted and on the surgery schedule to have it removed. Joel would have killed me if I put a picture of him on this blog in the hospital, but just know that he looked hot in that blue stylish hospital gown. We are thankful he survived and is back home with us tonight.

Quit being such a pansy Joel! JK glad you're all fixed bro.

That can be a really scary situation. I'm glad that it didn't burst on him. Get better soon Joel!

Haha I love the picture with this blog. Glad he's okay. Yikes, he's lucky to have you. That could have ended up being much worse.

oh that totally stinks....tell him we hope he feels better soon! So good you are so on top of it!

Wow! That came fast! Welcome to the no-appendix club joel. Let us know if you guys need anything. I remember it was not a fun recovery.

Gald you made it!!! Hope you are feeling better!!