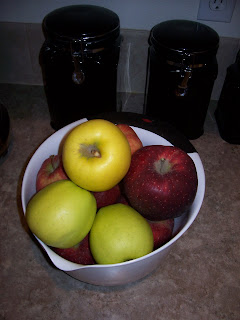 My grandma Joyal makes the best apple pie. She could win a blue ribbon every time she bakes one. Joel and I have had so many apples lately, either given to us or ones that we have bought, that we did not know what to do with them all. So, the other night Joel and I decided to call my grandmother and ask for her secret recipe. She graciously gave it to us...which put Joel on a mission.

I have been busy with a Christmas craft that I have been working on for days, and Joel was so bored a few nights ago, so he decided to make the apple pie all on his own. He did such a great job. It ended up just like my grandma's famous pies.

Hopefully Joel will continue to bake more pies in the future. I do not think I could have gotten the crust to look as good as he did. Wish you were all here to try it! 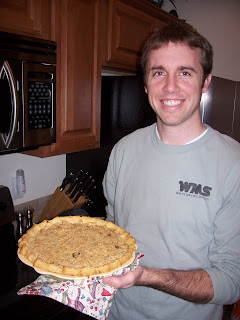 (Joel with his apple pie - It was soooo good!)

i miss greenbluff so much, and a lot of other things from spokane. i had to add your blog to mine because i keep going to erryn's blog to check up on the fun things you are doing....looks like your doing well. p.s., send me a pie. =)

Look how cute your blog is....so about that apple pie...do you share the recipe???? Looks scrumptous!!