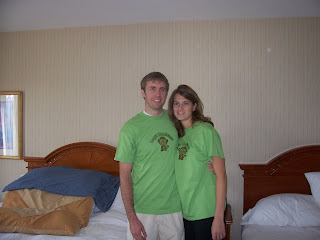 Today (Saturday, September 13, 2008) Joel and I did a race in Portland, Oregan with my brother Eric and his wife Jenny. We really did not know what to expect - we knew that it was like the TV show the Amazing Race scaled down to a day - but it was great and so much fun. They gave us 14 clues that we needed to figure out and then take pictures at the sites that the clues led us too. It was so much fun to spend time together - All four of us worked well together -Jenny was great at figuring out the puzzles, Eric was great with the maps, Joel was great at locating all the objects we needed to find, and I was just enjoying the race and people watching - and helping out occasionally. 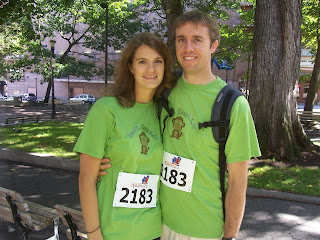 (Us getting ready for the race to start - We have to give our friend Stacy a shout out and a big THANK YOU for helping us make our sage monkey shirts...Thanks Stacy) 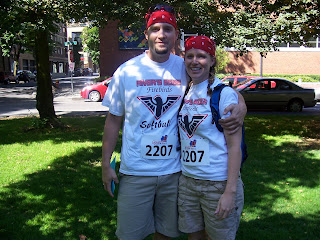 (Eric and Jenny getting ready to take off to our first clue)
There were prizes for the best dressed (in costume) group. Several groups took it upon themselves to dress up, but I thought the next picture was the group that should have won. Joel said they were dressed as an 80's band - Whip It music video - or something. I had never heard about it, but Joel loved the 80's. 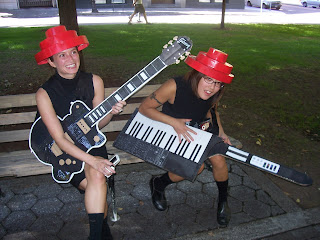 (My favorite dressed-up group at the race)
They gave us all a clue sheet that had 14 clues on it. They were puzzles and riddles that you had to solve. They took us all over Portland. The trick was that you were not allowed to use any form of transportation except on foot or the bus and trolly system. 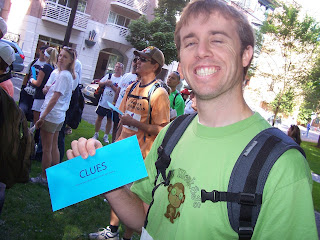 (Joel with our clue envelope - he is a little excited) 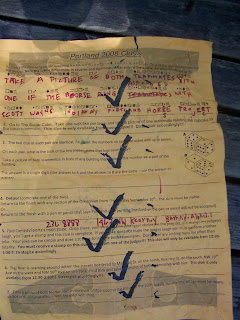 (Our clue sheet)
Most of the clues led us to places, and asked you to take a picture on your digital camera. We had to turn in all of our pictures at the end to qualify. The next pictures are some of the many picutes that we took along the way. 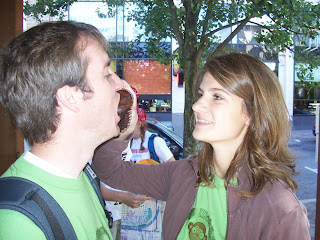 (We had to find a small cupcake shop in the middle of nowhere, and take a picture of one teammate feeding the other a cupcake. Joel was nice enough to get fed - he said that it was the best cupcake ever) 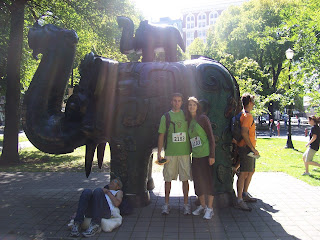 (Some random elephant statue we had to find) 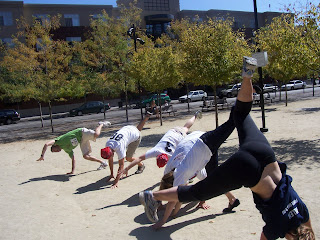 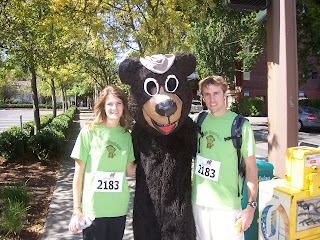 (We had to find yogi bear walking around Portland in a large radius of blocks - It took forever...but we finally found him) 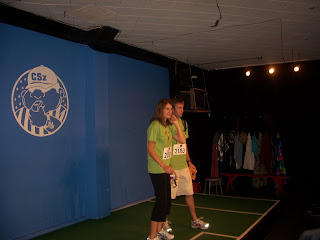 (We had to tell jokes on stage at a comedy sports club. We had to keep telling jokes until the audience laughed. Good thing Joel knows some lame jokes that a few people find funny!!) 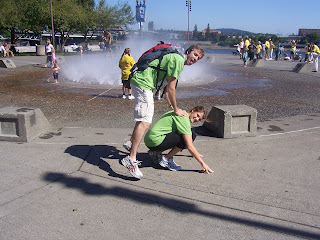 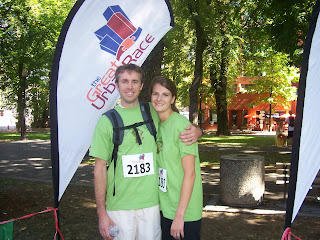 (Don't worry...we finally made it across the finish line)
They said it would take between 1 1/2 hours to 5 hours to complete the race. We did it in 2 hours. We all thought that was pretty good since we do not live in Portland. We came in 50th place out of 120 teams. 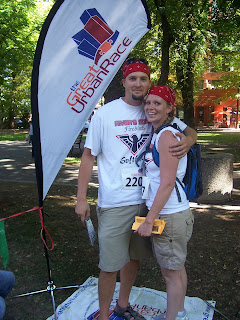 (Eric and Jenny at the finish line) 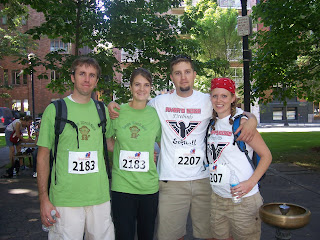 (All of us after the race - We had a blast!)
I would recommend this race to everyone. They have them in large cities all over the united states. Just google Great Urban Race to see all the locations.
Have fun.

awesome! i saw one of those in san diego & andy & i totally want to do it now after seeing your fun experience!

what a great idea! sounds like you guys are having way too much fun up there! =)

I will be doing this next year for sure!!!! Looks like a blast!!