Joel decided that since he had three weeks off during the time of Alaina's birth that he would grow his facial hair out.  And since it worked out perfectly with the month of Movember (the month formerly known as November, is a moustache growing charity event held during November each year that raises funds and awareness for men's health and cancer) he decided that he would make a pretty mean moustache.  The beard was getting pretty overgrown in my opinion, and then yesterday I got blessed with this look from my husband.  Yuk!  I think I will take the overgrown beard over this any day. 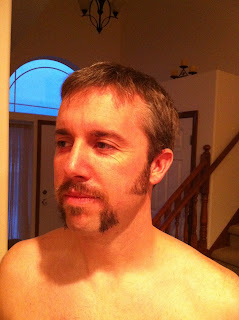