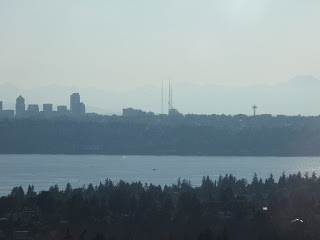 Joel and I headed to Seattle for the weekend. We needed to get away and we have not been to Seattle forever. The trip began with us staying the first night in Bellevue and visiting our friends Paul, Esther and cute little Leah, and also spending time with my cousin Christy that moved to the area recently. We got to Bellevue on Friday and headed over to Paul and Esther's house for some dinner, and then a walk through an art festival. We then headed to the Microsoft building in Bellevue and went to the top floor to look at the views of Seattle and the surrounding areas. It was beautiful. The first picture on this post of Seattle was taken at the top of this building. 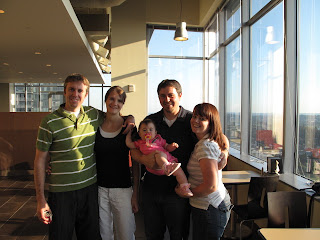 Here are Joel, Jen, Paul, Esther, and Leah at the top of the building enjoying the views.
Then Joel and I headed downtown Seattle to the waterfront with my cousin Christy. The weather was perfect and the sunset was beautiful. 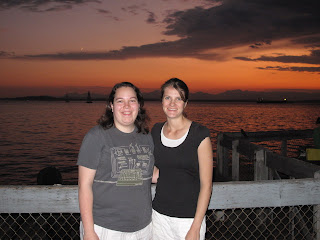 Jen and her cousin Christy on the Pier. 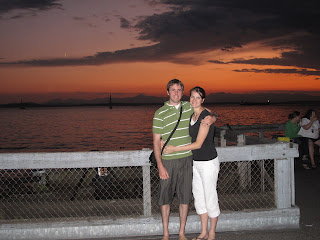 Joel and I
We all just had a great time hanging out downtown Seattle and chatting. It was fun to catch up with Christy. I have not seen her for awhile, and it was great to know that she is enjoying Seattle.

Then the next day Joel and I headed to Bow (outside of Bellingham), Washington for the annual Samish Bay Low Tide Mud Run and Bivalve Bash. This mud run and festival was held at one of the local oyster farms in the area. we met up with Erryn & Jake and Paul & Esther at the festival. 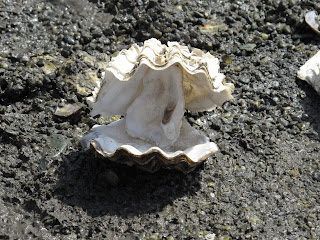 The festival had music, little shops, and tons of sea food. But the main event was the mud run.
Before the run, Joel and I walked around and found this cute little lighthouse made out of oyster shells. 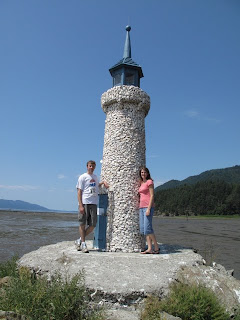 In this next picture you can see the shells better. It was so cute. I have never seen anything like it, and it really had a light that worked in the top. 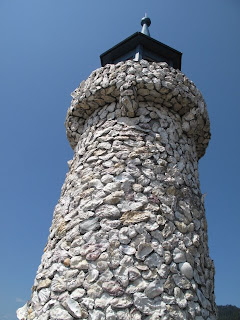 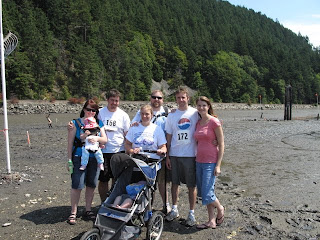 Here we all are before the race began. 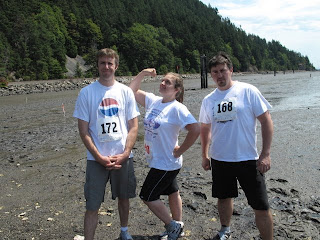 The three race competitors were Joel, Erryn and Paul. 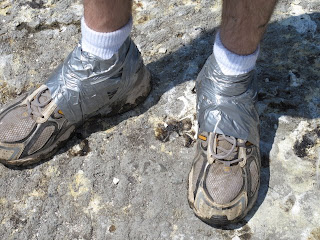 They had to duct tape their shoes on so that they would stay on their feet during the race. CRAZY!! 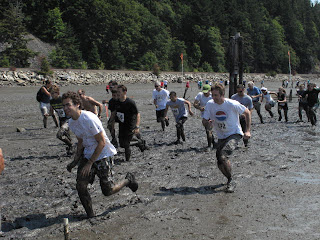 Joel is the one in the Pepsi shirt. He did very well and came in close to the front of the pack. 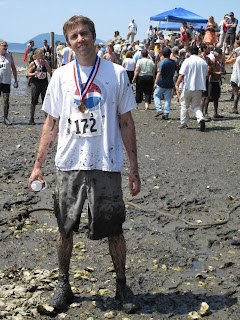 This is a picture of Joel after the race. He looks so nice and dirty. 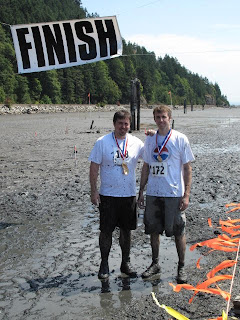 Paul and Joel at the finish line. 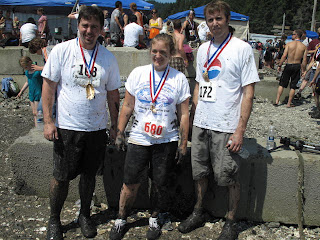 The three racers after the race. They all got oyster medals for competing and completing the race. Joel said that is was so exhausting, that it felt like he had just ran a 1/2 marathon, when really he had only run 250 yards in 3 feet of mud. It was a good workout for them.
We then headed back to Bellingham and had dinner at a local hamburger shop. And then Joel and I headed home with Erryn and Jake and spent the night with them and their cute Jaida.
We had such a great time with everyone this weekend. 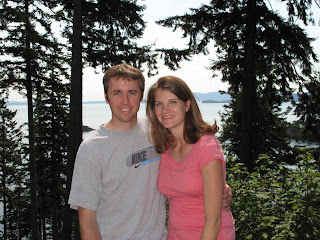 Hopefully we will be able to head back to the Seattle area again soon.
It was a blast!

Moose on the Loose

This is what I saw just a few blocks from my house as I was driving home from work yesterday. The Moose was up in some trees, so I could not get a good picture, and when I called Joel to tell him about the Moose he stated that I could not get out of the car and get close to it. 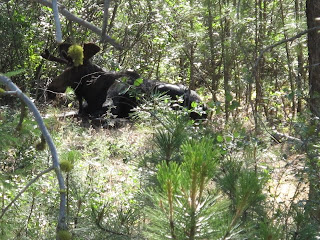 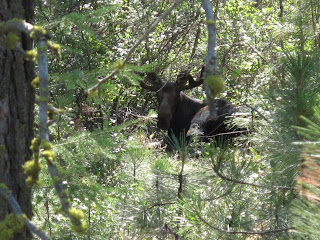 It sure is fun to see some wildlife around our place every once in awhile. I wish the Moose would have stood up so I could show how big it was.

A Great 4th of July! 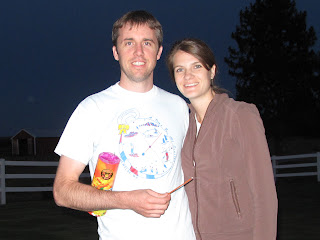 We went to Joel’s parents’ house for the fourth of July this year. We had a great dinner with many members of his family. Joel’s family is spread out so much that it is hard to get all of his siblings together. Most of his family was able to make it, so we had a great time visiting with them and just playing with the nieces and nephews. 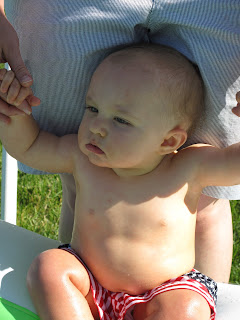 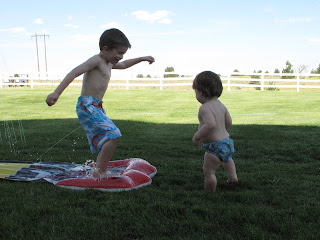 Jason's kids Jaxon and Atlas playing in the water 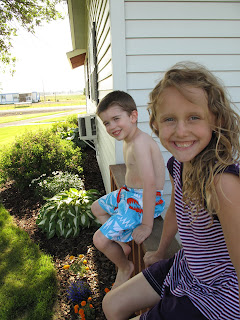 Jaxon and Erica just hanging out!
Once it started to get dark, we got out some sparklers for the kids to keep them entertained until we were able to light off some bigger fireworks. Joel and his friend Phil drove to the Indian Reservation on Saturday morning to buy some fireworks for the evening. They did a great job picking out fireworks and put on a good show that evening. 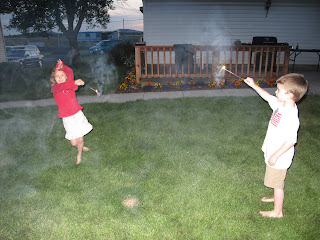 Erica and Jaxon playing with sparklers!! 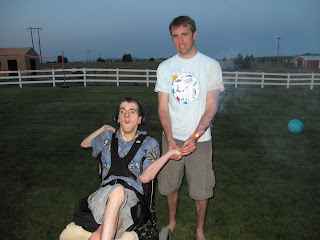 Joel and his brother Justin enjoying a sparkler together. 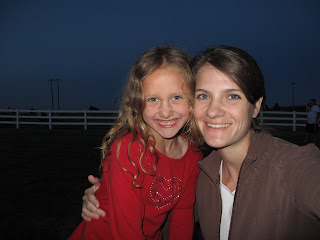 Erica and Jen getting ready to watch some fireworks.
We really had a lot of fun with his family. Joel was sad to say good-bye to his brothers and sisters that live far away, and cannot wait until they all get together again.
HAPPY 4th of JULY!!